For the first time since anyone can remember, members of Myanmar’s majority Bamar people are seeking long-term solidarity with the country’s ethnic minorities. Since a coup in February 2021 stunned the world, the military, known as the Tatmadaw, has violently cracked down on both the Bamar and ethnic minority citizens protesting its takeover. Its tactics have included burning down entire villages and firing heavy artillery against its own people. So far, more than 2,000 people have been killed in its countrywide civil war with the poorly armed People’s Defense Force (PDF).

Christian NGO Free Burma Rangers (FBR), which has trained 6,000 ethnic minorities as first responders in the past two decades, has observed this growing unity up close. Increasingly, young Bamar people from cities like Yangon and Mandalay have left their college studies and careers to help the growing popular resistance. Some have gone to the jungles to learn from ethnic armed groups how to fight the Tatmadaw. Others have joined FBR trainings, where trainees alternate between intense physical training and learning how to dress a gun wound or navigate dense jungle terrain.

Even as Myanmar faces its worst fighting in its 70 years as a free nation, many point to the unprecedented unity across ethnic and religious divides. While the country’s Buddhist nationalist leaders previously declared that Myanmar belonged solely to the Buddhist Bamar, now people of all backgrounds have banded together against the common enemy of the military junta.

“This has never happened in Burma, never in my 29 years here,” said Dave Eubank of FBR. “What you have is hope.”

“You are not authentic Burmese”

Religion and ethnicity have long been intertwined with politics in Myanmar, also known as Burma: The country comprises approximately 130 ethnic groups with the largest being the Bamar, who make up 68 percent of the population. The Bamar also make up most of the country’s elite, including the Tatmadaw, and have long clashed with other ethnic groups seeking greater autonomy.

Most Bamar practice a mix of Theravada Buddhism and indigenous Burmese folk religion. Buddhism is the state religion, and almost 90 percent of the population are practicing Buddhists. Christianity, which is mainly practiced by Kachin, Chin, Karenni, and Karen ethnic groups, makes up about 6 percent of the population, and Islam, practiced by the Rohingya, makes up 4 percent.

During the time of British colonial rule (1824–1948), Buddhist nationalism sprang up as the British suppressed Buddhist practices and promoted secular education. This anti-Western movement led to the creation of the Burma Independence Army, which the Tatmadaw view as their predecessor, in December 1941. The country gained its independence in 1948.

Post-independence, Buddhist nationalism was marked by an anti-ethnic minority and anti-non-Buddhist movement, according to David Moe, a Chin scholar who wrote his dissertation on Buddhist nationalism. Former prime minister U Nu’s slogan encapsulated this idea: only the Bamar race, only the Burmese language, and only the Buddhist religion. This underlying thinking led not only to discrimination against those outside the Bamar Buddhist group but also to the world’s longest civil war.

“They feel that this nation belongs to Buddhist people only,” Moe said. “And they also say that in this Buddhist nation, if you are not a Buddhist, you are not authentic Burmese.”

In 2010, the military junta introduced some freedoms, released democracy leader Aung San Suu Kyi from house arrest, and allowed the people to elect some of its leaders. But the Buddhist nationalism ideas remained. Suu Kyi became widely reviled by the West as she defended the atrocities committed by the Tatmadaw against the mostly Muslim Rohingya minorities.

Last year’s coup appears to have shaken this persistent fault line, as the Tatmadaw violently cracked down on Bamar protesters angered by the takeover. Soldiers shot peaceful supporters of the Civil Disobedience Movement on the streets and threw movement leaders in prison, where torture is common. The Tatmadaw also sentenced Suu Kyi to 20 years in prison, including three years of hard labor, for election fraud and a myriad of other charges.

Facing the brutality of the military firsthand, many Bamar apologized to ethnic minorities for turning a blind eye to their plight. Bamar students, civil workers, and teachers in the cities trekked into the jungles to learn how to shoot a gun or assemble a homemade grenade from ethnic armed groups such as the Karen National Liberation Army. Returning home, they used what they learned to create their own PDFs and defend their communities.

Fighting has increased in both ethnic areas like Moe’s hometown of Mindat in Chin State and Bamar-majority areas like Sagaing Region. In Mindat, residents were the first to pick up knives and hunting rifles to create a local militia to fight against the military. The fighting intensified, and in May 2021, the military imposed martial law on the city, destroying homes and attacking the resistance with heavy weapons. Thousands of residents, including Moe’s family and friends, fled the city to villages and internally displaced people (IDP) camps in the jungles.

Sagaing Region has also seen some of the most intense fighting between the military and local PDFs. Villagers reported the Tatmadaw have indiscriminately attacked communities, killed civilians, burned homes, and forced thousands to flee. In total, more than 1 million people in the country are internally displaced.

The government-in-exile, called the National Unity Government (NUG), is drafting a federal constitution that would allow seats at the table for different ethnic groups, which has never been done before in Myanmar. Susana Hla Hla Soe, a NUG cabinet member, apologized that she did not “raise a voice for our brothers and sisters from the ethnic areas, including Rohingya brothers and sisters.”

Still, Moe notes that the change of heart is mostly among the young people of Myanmar, especially Generation Z. While he believes this unity can remain if and when the common enemy of the Tatmadaw is defeated, he notes that in this new government, the Bamar will still remain the majority group.

“I am optimistic, but on the other hand, I need to be very speculative,” he said.

FBR’s deputy director, a 54-year-old Karenni man known as Monkey, said that after the coup, many Bamar people contacted FBR, mistakenly thinking they could learn how to fight or even assassinate the Tatmadaw. Yet Monkey would tell them that’s not FBR’s mission.

“We help get people out of the fire zone,” he said. “We just help people because of love.”

Some leave disappointed, but others join the training. In contrast to the ethnic-minority trainees, many of the Bamar from the cities show up in jeans and have no experience with living in the jungle.

But what they have lacked in physical fitness, says Eubank, they make up for in their ability to quickly navigate with a GPS or suture a wound. Unlike ethnic people, most of whom have only an eighth grade education, many Bamar trainees have at least some college education or worked civil jobs before the coup.

Monkey noted that typically during the beginning of the training, there are tensions between the ethnic and Bamar trainees as they don’t seem to trust each other. But over time they realize they are part of the same team. Going on dangerous missions to provide aid for ethnic groups fighting the Tatmadaw especially draws the different groups together, Monkey said, as they realize they need to lean on each other to survive.

As a Christian, Monkey noted that while FBR stands with the people, “we are not against the enemy. We pray for them before and after the missions. … We pray every day for the Burma army to see the truth.”

FBR has seen some soldiers defect and repent of their actions. Monkey found that as the trainees pray for their enemy together as a group, the Buddhists join in praying as well.

“Without God, we cannot do it,” said Monkey. 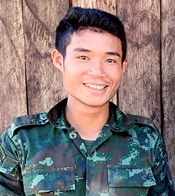 Hearing the whine of a military aircraft overhead, Karenni resistance fighters and members of FBR scrambled into ditches and culverts on the side of a road in the village of Thar Yat in Karenni State on February 24. A bomb exploded 40 yards away in a cloud of smoke and debris, as the sound of gunfire continued to punctuate the air.

As the smoke cleared, Dave Eubank saw a limp body on a driveway ahead of him. Running over, he was surprised to find Saw Ree Doh, a young Karenni ranger he had worked closely with, in a pool of blood. Shrapnel had sliced through his neck, killing him instantaneously.

Eubank and the other rangers tried dragging Ree Doh’s body to where they had hidden their vehicle, but planes kept attacking the group, forcing them to duck for cover. Eubank then radioed members back at the base to pick the body up while he and the other rangers stayed hidden among some trees until the planes left and they could return to base. He feared that if they left his body, the soldiers would mutilate it to send a message to others.

Members of FBR placed Ree Doh’s body on a homemade bamboo table covered with a tarp and lit candles around him, softly praying and singing hymns. The next morning, they carried the body in a coffin to a burial ground a mile away, lowered it into the ground, and marked the grave with a cross. Ree Doh’s sister, who was living in an IDP in the jungle, came out of hiding to attend the funeral.

Eubank said they typically lose one to three rangers a year from illness or gunfire. But in the past year they have lost ten rangers, four from illness and six from attacks by the Tatmadaw.

“All of us carry more sadness,” Eubank said. “I could cry at any moment, all the time.”

Eubank’s daughter, Sahale, remembers Ree Dohas fearless: He was the first to rappel off a bridge during FBR training or sing and dance for children stuck in IDP camps. Unlike many of his fellow trainees, he was direct and not afraid to correct the instructors when he thought they were wrong. Sahale remembers one time they were building a raft to float down the river when several Karen children started following them into the water. Ree Doh scooped them up, placed them on the raft, and took them up and down the river.

Such willingness to help others was what brought him to that village in Karenni State last February. Karenni resistance forces were trying to hold off the Tatmadaw and buy time for residents to evacuate. Initially, Ree Doh had stayed at the base, but when he heard the group was under heavy fire, he jumped on a motorbike to the frontlines to help. It was while he was running toward the rangers that the bomb killed him.

“It showed me how compassionate he was,” Sahale said, noting that Karen and Karenni don’t speak the same language and can be prejudiced toward each other. “He took time to show them a little bit of happiness and joy.”

Workout Splits Explained — How They Work and Why You Need Them

How to Do the Push-Up — Benefits, Variations, and More