Brian Houston, cofounder of the Hillsong megachurch and media empire, announced he is stepping aside as global senior pastor, telling worshipers via a prerecorded video played during the Sunday morning service at Hillsong’s Sydney, Australia, headquarters that he would be taking a leave of absence from the church until the end of this year.

Citing a decision by the Hillsong board and external legal counsel, Houston, standing with his wife and cofounder, Bobbie, said “best practice” dictates that he absent himself completely from church leadership as he faces trial for allegedly failing to report sexual abuse. The court proceedings, he said, are “likely to be drawn out and take up most of 2022.”

“It’s been an unexpected season, and we are thankful for you all and for the community we share,” Houston said on the video streamed toward the end of the service. “I never get tired of the praise reports and miracles, especially those committing to Jesus.”

Houston’s leave of absence comes after more than a year of scandals that rocked the church both in Australia and abroad and amid Houston’s own legal troubles at home. Houston stepped down from the board of Hillsong in September.

“The result is that the Hillsong Global Board feel it is in my and the church’s best interest for this to happen, so I have agreed to step aside from all ministry responsibilities until the end of the year,” Houston said in the January 30 video announcement.

Houston, 67, was charged in August with concealing a serious indictable offense of another person. Police say his late father, Frank Houston, also a preacher, indecently assaulted a young male in 1970. Court documents allege Houston knew of his father’s abuse as early as 1999 and “without reasonable excuse,” failed to disclose that information to police.

His lawyers told the court in October that Houston would plead not guilty, but his trial has been delayed multiple times, according to Perth Now. 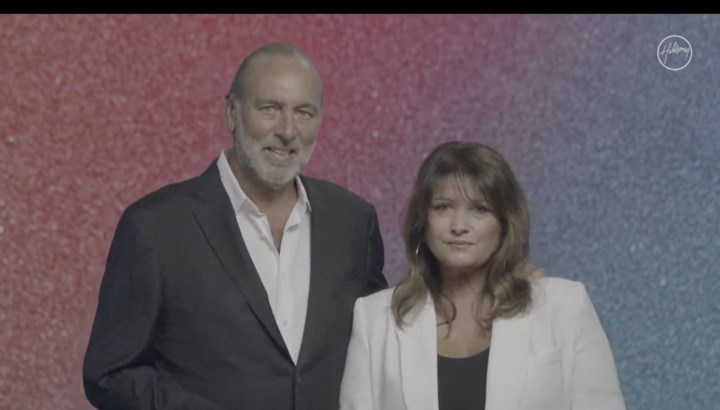 Brian and Bobbie Houston in a screenshot of a Jan. 30 video announcing his extended leave of absence from leadership of Hillsong, the global megachurch the couple founded.

In his statement to the church Sunday, Houston said the allegations came as a “shock.” He said he plans to “fight the charge and welcome the opportunity to set the record straight,” and he needs “to be fully committed to preparation and engagement with the case.”

The board is supportive, Houston said, and they “have talked about the effects of the situation with my father, which go back many years up to the current legal case, and the impact this has had on me emotionally.”

As CT and The Associated Press noted in October:

Hillsong Church has said repeatedly that it has not been involved in this matter, as Frank Houston never worked for the church, and has defended Brian Houston’s response.

“Upon being told of his father’s actions, Brian Houston confronted his father, reported the matter to the National Executive Assemblies of God in Australia, relayed the matter to the governing board of Sydney Christian Life Centre, and subsequently made a public announcement to the church. Brian sought to honor the victim’s multiple requests not to inform the police,” the church said in a statement in July.

“As a recent development, charges have officially been filed against Brian Houston,” the church said at the time. “We are disappointed that Pastor Brian has been charged, and ask that he be afforded the presumption of innocence and due process as is his right. He has advised us that he will defend this and looks forward to clearing his name.”

Phil and Lucinda Dooley, the lead pastors of Hillsong Church Cape Town, will step in as the interim global senior pastors, according to Houston. His wife, Bobbie, will remain “fully engaged in church life,” and her leadership positions, he said.

“It is 50 years this week since I commenced Bible college in New Zealand, so with five decades of active ministry behind us, be assured we will make the best of this season to replenish spiritually, emotionally and physically,” Houston said.

Houston, a New Zealand native, founded Hillsong Church with Bobbie in 1983 in the suburbs of Sydney. An evangelical church affiliated with the Pentecostal network of Australian Christian Churches, Hillsong now boasts 30 locations around the world—and launched an Atlanta campus in June 2021—with an average global attendance of 150,000 weekly. Two Hillsong College campuses, in Sydney and Phoenix, Arizona, offer “biblical training” and “ministry experience.”

The church’s growth was, in part, spurred by its wildly popular worship bands and their music, now nearly ubiquitous in churches around the world. Hillsong became its own denomination in 2018.

The Definitive Guide on How to Build Big Arms

Blessed Are Those Who Mourn Suicide