As Ukraine continues to be battered by Russia, Syrian refugees are praying.

“This is what happened to us,” said refugee students at the Together for the Family center in Zahle, Lebanon. “We don’t want it to happen to others.”

Born in Homs, Syria, to a Baptist pastor, Izdihar Kassis married a Lebanese man and then founded the center in 2006. She shifted her ministry to care for “her people” when the Syrian civil war started in 2011. About 50 traumatized teenagers find counseling there every year, and 300 have graduated from the center’s vocational programs.

As the refugees discussed the “horrible” situation in Europe during the weekly chapel service, Kassis suggested intercession. Bowing their heads, the 40 children and 30 Syrian staff and volunteers knew better than anyone what to ask for.

But one child wanted to be sure the Ukrainians would know of their solidarity. He went outside into the cold and snow of the Bekaa Valley, where most of Lebanon’s 1.5 million Syrian refugees take shelter. 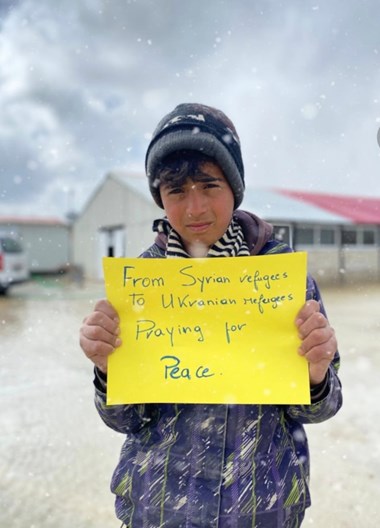 Image: Together for the Family

A Syrian refugee in Zahle, Lebanon

Since the invasion, about 4 million of Ukraine’s population of 43 million have become refugees. Another 6.5 million are internally displaced.

Yet 11 years since its civil war, most of Syria’s 6.8 million refugees—out of a population of 20 million—still live in limbo. Europe largely shut its doors, certainly in comparison to its warm welcome of those fleeing Russian aggression.

Many have taken offense.

“There is the perennial double standard and selective outrage of global news media, Western governments (and, sadly, even Western Churches) when it comes to reporting on wars, conflicts and the plight of refugees,” stated Vinoth Ramachandra from Sri Lanka, a senior leader with the International Fellowship of Evangelical Students (IFES), affiliated with InterVarsity.

“If Ukrainians were not blonde and blue-eyed, would their plight have occasioned [this] outpouring of compassion?”

It is a fair question. Is European hypocrisy—even racism—on full display?

Arab Christians are not quick to judge.

Born in Syria, Joseph Kassab today heads the Beirut-based Supreme Council of the Evangelical Churches in Syria and Lebanon. He notes the more than one million countrymen taken in by Europe—Western Europe, primarily. Eastern nations, he said, are still recovering from the communist era and have not yet developed the same sense of human rights.

There should be no discrimination, yet even this he understands. The early church struggled to open its mission to non-Jews.

“Racism is in every society,” Kassab said. “But Europeans have been more welcoming to the Syrians than many Lebanese.”

Being Muslim is a factor, said Elie Haddad, president of Arab Baptist Theological Seminary in Beirut. But also important is that most are rural, uneducated farmers. Legitimate or not, people are uncomfortable with difference.

Europe is a bit hypocritical, but so is he.

“If a faculty member needs shelter, I will open my home,” Haddad said. “For a stranger, not so much.”

One who did open his home is a Frenchman of Lebanese descent in Nice.

A nurse at a local hospital, in 2018 François Nader was the only available Arabic speaker to assist a refugee family whose working-age son needed emergency kidney dialysis. He walked them through the necessary paperwork and for three months gave boarding to the recovering Syrian. Nader even offered him above-average wages for housework, providing informal work since French law forbade formal employment.

Yet France today is permitting Ukrainians up to three years of residence and employment (per a European Union directive).

And Nader, now in Bordeaux and married to a Russian with Ukrainian relatives, applauds. A simple phone call from authorities validated the legality of four refugees he now has in his home. A nondenominational Christian, he believes the gospel calls people to treat everyone the same.

“Muslim values are totally opposite to ours,” Nader said. “It needs generations to have their mind adapt to the European way.”

The fear of terrorism is an issue. But so is adaptation. Muslims concentrate in the banlieues, ghettos that reinforce a separatism damaging to French society, he said. Meanwhile, Ukrainian tourists visit the Louvre, where their children behave, he said. On the tramway they sit quietly, reading books.

“It is a stereotype, and it is a little bit cruel,” Nader said. “I’m sorry to say this, but it is also human.”

But is it biblical?

God has created both similarity and difference, said Leonardo De Chirico, chair of the theological commission of the Italian Evangelical Alliance. According to Galatians 6:10, he said, it is proper to give preference.

“The principle of proximity calls us to give special attention to those who are near us,” he said, “in the faith, in the family, in the nation, and in our surrounding context.”

While this applies to ethnicity, it does not apply to culture or education, said De Chirico. All should be welcomed and helped to integrate. But where resources are limited and governments overwhelmed, it is not wrong to discriminate.

The Bible even does so, he said, as the original Hebrew differentiates between “aliens.” The gerim (Lev. 19:33–34) are to be treated justly like fellow Jews, but the zarim (Ex. 12:43) are barred from celebrating Passover.

A modern distinction is between refugee and migrant.

“Freedom of movement is not absolute,” said Marc Jost, general secretary of the Swiss Evangelical Alliance. “I like diversity, but it entails risks that must be regulated.”

Cultural proximity led Switzerland to waive for Ukrainians the case-by-case examination required for Syrians. Jost rejects the privilege many wanted to give for faith and ethnicity, but Swiss authorities thought distinction necessary to weed out potential terrorists.

Still, the difficulties of integration are real, and the government wanted to reduce the “pull factor,” especially for economic migrants seeking a better life. Those “threatened by life and limb” should be permitted with no discrimination.

But many say such cases are the minority.

Greece has accepted nearly 5,000 Ukrainians since the war began. Up to 30,000 could be accommodated, authorities said. The Mediterranean nation has been especially attentive to Mariupol, repatriating nearly 200 nationals from an area originally settled by Greeks in the sixth century B.C.

But Greece already hosts about 42,000 refugees from various countries. Many others are turned away by boat. The Greek government stated that as it processes applications, 7 out of 10 applicants are not refugees.

“We should not equate migrants with refugees,” said Slavko Hadžić, Langham preaching coordinator for the West Balkans, from Bosnia. “Migrants can use legal means to apply for jobs.”

His nation has been criticized for “inhumane” migrant camps. But according to a 2020 report by Human Rights Watch, out of 18,000 asylum seekers, Syria was only the fifth-most-common nation of origin, behind Pakistan, Afghanistan, Bangladesh, and Iraq.

Churches helped them all, said Hadžić, as they should. But he criticized an idea heard frequently in Eastern Europe about the preservation of “Christian civilization.” While believers have a special responsibility to help all followers of Jesus, this does not include the nominal in faith.

“Whatever label a secular government puts on itself,” he said, “there are no Christian nations in the world.”

But it is good there is Christian heritage, said Samuil Petrovski, president of the Serbian Evangelical Alliance, and it should be protected against new waves of Western-imported identity politics. But as the government should “bring light to dark places,” it must not be at the expense of refugees or migrants, regardless of their religion, he said. The Bible teaches that assistance should be given to all who are truly in need.

Prime Minister Viktor Orbán calls his nation a “Christian democracy,” and the Catholic-majority country maintains a cabinet-level ministry to support persecuted Christians in the Middle East. But, while now saying Ukrainian refugees are coming to a “friendly place,” two months before the war Orbán stated, “We are not going to let anyone in.”

Eastern Europeans have held onto the heritage of Christendom longer than their Western neighbors. But it is an old Orthodox idea—rejected as heresy in 1872 by the Council of Constantinople—that merges political nationalism with an ethnic church. And given Russia’s argument that Ukraine properly belongs to the Moscow patriarchate, over 1,100 Orthodox clerics and scholars condemned phyletism again.

“The battle is won in the hearts and minds of others, not in restrictive laws, even when created with good intentions,” said Bradley Nassif, author of The Evangelical Theology of the Orthodox Church and a former professor of theology at North Park University. “The best approach would be for the state to support the church without enacting laws and policies against religious minorities.”

Jost believes that to defend a nation’s Christian heritage, it must continually be demonstrated to benefit society as a whole. Human rights, he said, are derived from Christian ethics.

But other evangelical leaders protested. De Chirico, from majority Roman Catholic Italy, said a Christian identity of a state is “fraught with problems.” Kassab said if the Middle East promotes its Islamic identity, it would “multiply the misery” of Christians.

The state should protect the heritage and identity of all, said Tom Albinson, president of the International Association for Refugees, an affiliate of the World Evangelical Alliance (WEA). There is good reason for communities to serve through networks and relationships of trust. And it is within the rights of a nation to protect its borders and to deport migrants.

But it is not right to pit the migrant against the refugee.

“Many nations today are spending much more money and energy on finding ways to prevent refugees and asylum seekers from ever crossing their border than they are in protecting people who have been robbed of place and are among the most vulnerable people on the planet,” said Albinson. “This needs to be exposed and confronted for what it is.”

Mixed migration confuses the issue, and human traffickers prey on them all. Meanwhile the refugees among them are often treated as guilty until proven innocent.

Having served eight years as the WEA’s ambassador for refugees until last year, Albinson counsels nations to invest in the infrastructure necessary to process claims fairly. Currently 86 percent of the world’s refugees are hosted by developing nations, he said. And out of a total of 26 million, only 1 percent are resettled in any given year.

The church, he counsels, should fill in the gaps.

“Government services and nongovernmental humanitarian agencies can offer help, but they are not able to strengthen hope,” Albinson said. “We are at our best when we care for those unlike ourselves, those who are strangers to us.”

And who is stranger to a Ukrainian than a Syrian?

Mother’s Day in the Arab world falls in March. Besides offering prayer, Together for the Family is collecting advice from Syrian wives and widows on how to deal with life when torn from husbands and sons.

They will send cards—and the little money they can spare. Graduates from the center’s carpentry program earn $2.25 per week. But due to the shortage in imported Ukrainian grain, their daily bread now costs 75 cents.

“The Lord has helped them here and lifted them up,” said Kassis. “They want to encourage Ukrainian women in the same way.”