On Sunday mornings, Caleb Fugate drives down a road in Pennsylvania’s rolling hills 70 miles northeast of Pittsburgh, past old houses on roomy plots of land, and parks in the gravel lot behind Diamondville United Methodist Church. The small, white building would resemble a single-room schoolhouse from the front if not for the giant Methodist logo—the cross and flame—beside the red door.

He officiates the 9 a.m. service and budgets 30 minutes to visit with members afterward. Then, it’s back in the car to drive 3 miles into town for the 11 a.m. service at Clymer First United Methodist Church, just a few blocks from a small strip of restaurants and local businesses in downtown Clymer.

The two churches are located in towns with a combined population of fewer than 1,500 people. By lunchtime, Fugate has preached to no more than 60 people, most of them elderly. During the week, he sees a younger crowd; he also runs the Methodist campus ministry at the nearby Indiana University of Pennsylvania.

This call is not what Fugate, 27, envisioned for himself when he graduated from divinity school. He turned down an associate pastor job at a large Methodist church in Houston to follow the advice of his childhood pastor in Punxsutawney: Return to rural Pennsylvania and minister in a context you know well.

“Coming to this little charge,” he said, “has been the best thing for my growth and maturing as a person.”

Small congregations like the ones Fugate serves are increasingly common in the US. According to a 20-year study from the Hartford Institute for Religion Research, small churches (100 or fewer in weekly attendance) now make up 70 percent of US congregations. 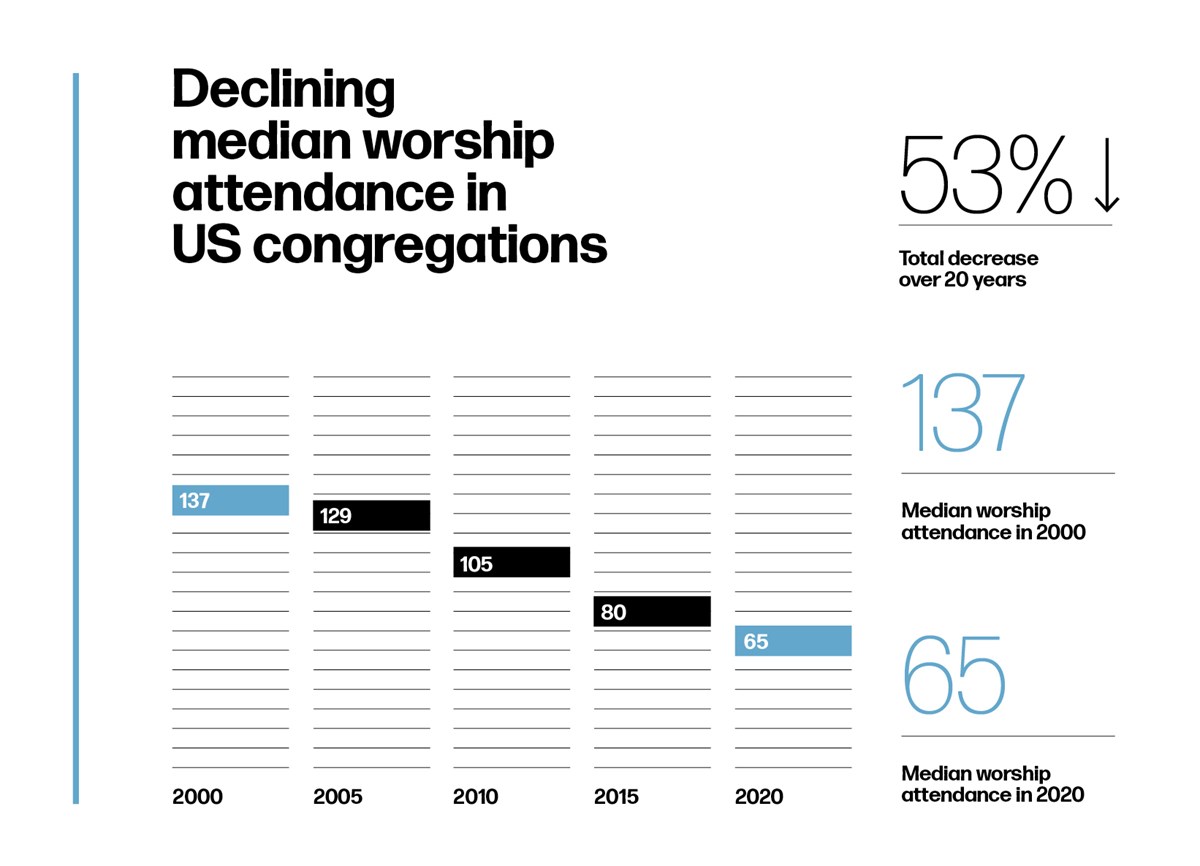 But the growing number of small congregations present their own challenges. Hearing from leaders in more than 15,000 US houses of worship, the Faith Communities Today (FACT) 2020 survey found that the most pressing issues churches face today vary by their size.

“Each size has its own gifts to give the community and also Christianity in general,” said Institute director Scott Thumma.

The average crowd at church on a Sunday morning is half what it was 20 years ago. In 2000, the median worship attendance at US congregations was 137; now it’s down to 65. As church attendance shrinks, small congregations make up a growing portion of the US religious landscape. In 2000, 45 percent of churches had fewer than 100 in weekly attendance. That has climbed to 65 percent.

Churches with fewer than 100 in attendance often face existential challenges. They are more likely to have part-time, unpaid, or bivocational pastors and spend the largest percentage of their budget on their facilities. Among churches with less than 50 in attendance on a Sunday morning, 65 percent have declined by 5 percent of attendees or more in the past two decades. 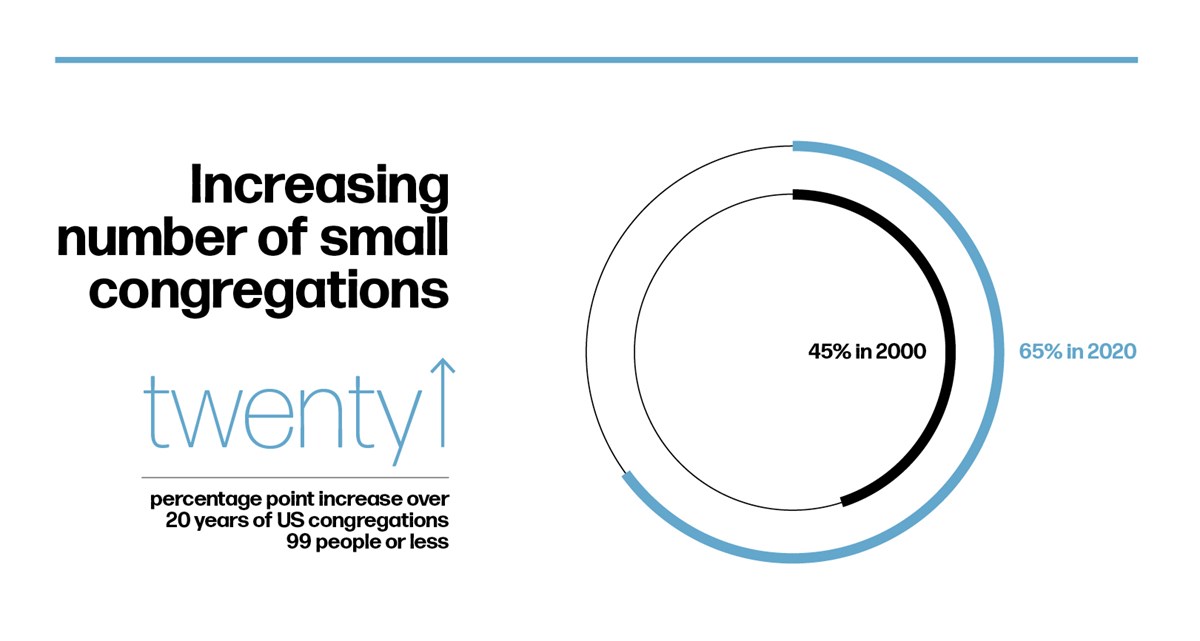 And since small churches often have part-time or unpaid clergy, they also spend less on staffing, which frees up their budget for missions and local ministry.

As a single 27-year-old, Fugate has the time and energy to invest up to 70 hours each week in three separate ministries, but he feels the stretch. The church in Clymer has some families with teenagers, so they need a youth ministry. Growing ministries need more time from their pastors, but with three ministries depending on him, there is only so much he can do.

“It is a strenuous job,” Fugate admits.

Diamondville United Methodist resides in a town of 200; the church ’s 20 attendees make up 10 percent of the local population. Fugate admits the church is not thinking about growing, something the FACT survey found common among the smallest churches. But the congregation wants to give as much as it can to the community while the church is still around.

When the congregation learned that a student in the local Head Start preschool didn’t have winter clothing, they reached out to the teacher to buy not just a winter coat but whatever shoes and clothing were needed. When a Christian daycare in the community moved buildings, the church sold soup and raised $500 for renovations.

Fugate says his parishioners are deeply committed to their churches, especially those who have attended for more than half a century.

Though Carol Boyer lives 20 miles from Diamondville, she drives past other Methodist churches to attend the church where she grew up and spent nearly all of her 75 years. Her great-grandparents helped found the church in 1842. She said that when she was a child, people would stream out of their houses each Sunday and meet up in a kind of parade heading toward the church.

Now, the stream of churchgoers is much thinner, to Boyer’s dismay. She said church members keep inviting Diamondville residents, even delivering blankets and invitations to every house in town.

In his two years of pastoral ministry, Fugate has discovered that small, rural churches are happy to let the pastor try new things. “It has been a blessing to me to have the freedom because we are at such a small scale,” he said.

With an average of 125 attending each week, First Baptist Church in Greenwood, Mississippi, isn ’t in immediate danger of closing, but it ’s not filling its sanctuary to capacity, either. The FACT survey found that medium-sized churches like First Baptist are not as large as they used to be. Churches with 101–250 attendees make up 21 percent of churches in the US.

Collin Montgomery, First Baptist ’s senior pastor, says the church, which dates back to the Reconstruction, has declined in recent decades but has spent the past two years working to revitalize. The smaller attendance leaves the historic 600-seat sanctuary feeling empty, so the church opens its doors to the local community whenever it can.

A private charter school rents the church ’s education wing during the week. Young Lives, the Young Life ministry to teen mothers, also meets at First Baptist, as does the board of a fledgling mobile pregnancy clinic.

Nearly 6 in 10 (58%) of medium-sized congregations offer space to outside groups, and about half of these congregations don ’t charge rent for building use. While most of the outside groups are support groups or nonprofits, the FACT survey found that churches host a variety of organizations, from 4-H clubs to yoga classes.

Across the country in Roseville, California, Valley Springs Presbyterian Church hosts so many outside groups during the week that it functions as an informal community center. Since the pandemic, attendance at Valley Springs has hovered just below 250 on a Sunday, with 40 or more households watching on YouTube. But the church is a hub of community activity: a preschool, county youth orchestra and choir, community events, and quilters guild all keep the church open during the week. Valley Springs also rents space to another congregation.

The rent from community groups helps offset the costs of a building whose mortgage was meant to be shouldered by more than 250.

Montgomery admits that the extra rental income helps, but the church doesn ’t seek tenants just for the money. The church wants to use its historic building to bless its community.

While the church wants to continue growing, Montgomery said the current size helps the church be a genuinely welcoming place. “Being this size helps us do relationships really well,” he said. “People feel like they know each other well and mobilize well when there are needs.”

Both Valley Springs and First Baptist have attendees who come to church only once each month, as activities like football games or trips to the lake pull them out of town. But those who attend regularly are deeply committed. Brad Anderson, Valley Springs’s senior pastor, noted that giving has increased since the start of the pandemic.

“Small congregations do intimacy and intense experience, and big congregations with resources have advantages, and in some ways the medium-size congregations can ’t do intimacy really well but also aren ’t a one-stop shop for programs. So they are in decline,” Thumma said.

The FACT study found that more than half of churches (52%) now say they are declining in attendance by at least 5 percent.

But Jeff Keady believes the ministry happening at small and medium churches is invaluable. He and Johnny Craig started the 200 churches podcast in 2013 to offer encouragement to pastors leading churches with weekly attendance around 200.

“Small churches dotting the landscape of our country are accomplishing a ton of ministry in the lives of families throughout the country,” Keady said. He is encouraged by the growing number of resources for small-church pastors, too. Ministries and organizations like the 95Network, New Small Church, Grow a Healthy Church, and Small Church Pastor raise the profile of small churches as valid pastoral callings.

But growing a small church can be a struggle when megachurches have so many more members and outsized marketing budgets to spread the word. In 2020, 60 percent of churchgoers attended the largest 10 percent of churches, and big churches showed the most attendance growth.

While the largest churches attract the most visitors, they don ’t necessarily keep them. Keady observed that the turnover rate is very high in America’s largest churches. And those who turn into members are less likely to engage meaningfully. Hartford ’s research shows the largest churches have the smallest percentage of people volunteering and the least amount given per capita.

While not wanting to disparage large churches, Keady worries about the how these churches can develop deep faith in attendees when anonymity is always a very real option.

Thumma said while these large churches have the sheer volume to muster spectacular programs, their churches are often unavailable to community groups because they are used during the week for church programming.

But megachurch leaders, those serving churches with regular attendance of 2,000 or more, have learned to counter the overwhelming size of Sunday mornings by getting members plugged into small groups.

In 2020, 90 percent of megachurches considered small groups as “central to their strategy of Christian nurture and spiritual formation,” compared to 50 percent 20 years ago. 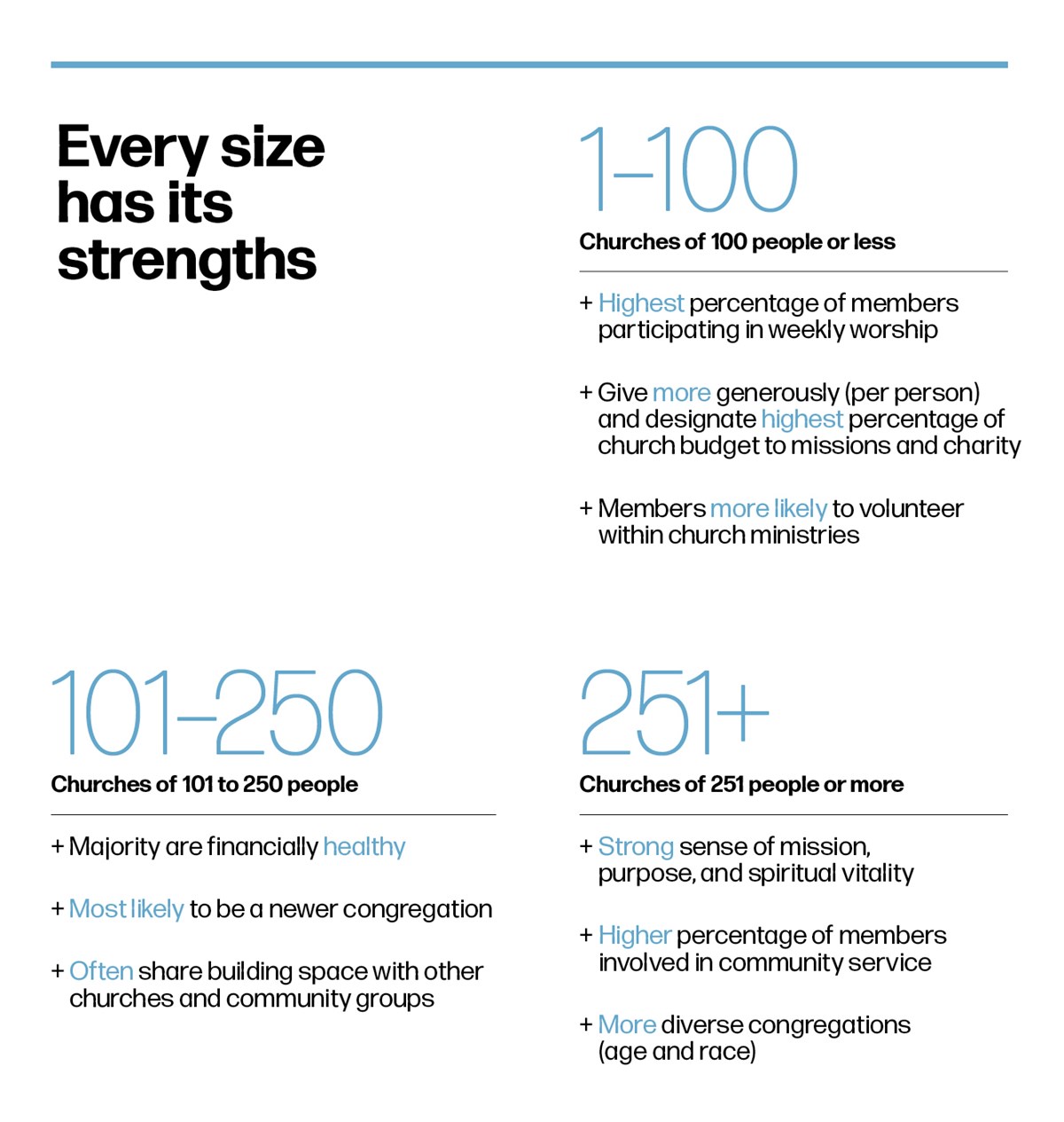 Thumma noted that in the 20 years that he has conducted these studies, 2020 marked the first time the median rate of change for church attendance was negative (-7%). “The average congregation is faring in some ways a little bit worse than it has over the past two decades,” he said. “That was surprising.”

But he was encouraged to see that a quarter of US congregations are now multiethnic (meaning 20% or more of a church’s participants are people of color), though it is the largest churches that tend to have a more diverse mix of races and ages. Churches of all sizes have embraced technology like Facebook as an essential tool for connecting with people outside the church building.

Pastors don ’t sugarcoat the obstacles facing their congregations, but they remain hopeful.

“I love our church,” Montgomery said. “We have a lot of work to do, but God is doing a lot of great things.”

Megan Fowler is a contributing writer for Christianity Today based in Pennsylvania. 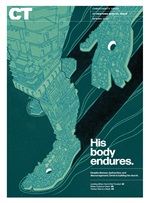 This article is part of our spring CT Pastors issue exploring church health. You can find the full issue here.


Subscribe to Christianity Today and get 2 special issues from CT Pastors each year plus instant access to the digital archives.

Community Builds Up with Lecrae