Nine million girls have gone “missing” in India over the past two decades due to sex-selective abortions, according to a new report on sex ratios and gendercide in the world’s second-most populous nation.

The problem rests mainly within the Hindu and Sikh communities, according to government-backed data, while the subcontinent’s Christians have maintained a “natural balance” of sons and daughters since 2001, according to a Pew Research Center analysis released today.

However, bias toward sons is waning among all religious groups in India, and researchers concluded the number of missing girls has dropped annually from about 480,000 in 2010 to about 410,000 in 2019.

“The new data suggests that Indian families are becoming less likely to use abortions to ensure the birth of sons rather than daughters,” stated Pew research associate Yunping Tong. “This follows years of government efforts to curb sex selection—including a ban on prenatal sex tests and a massive advertising campaign urging parents to ‘save the girl child’—and coincides with broader social changes such as rising education and wealth.” 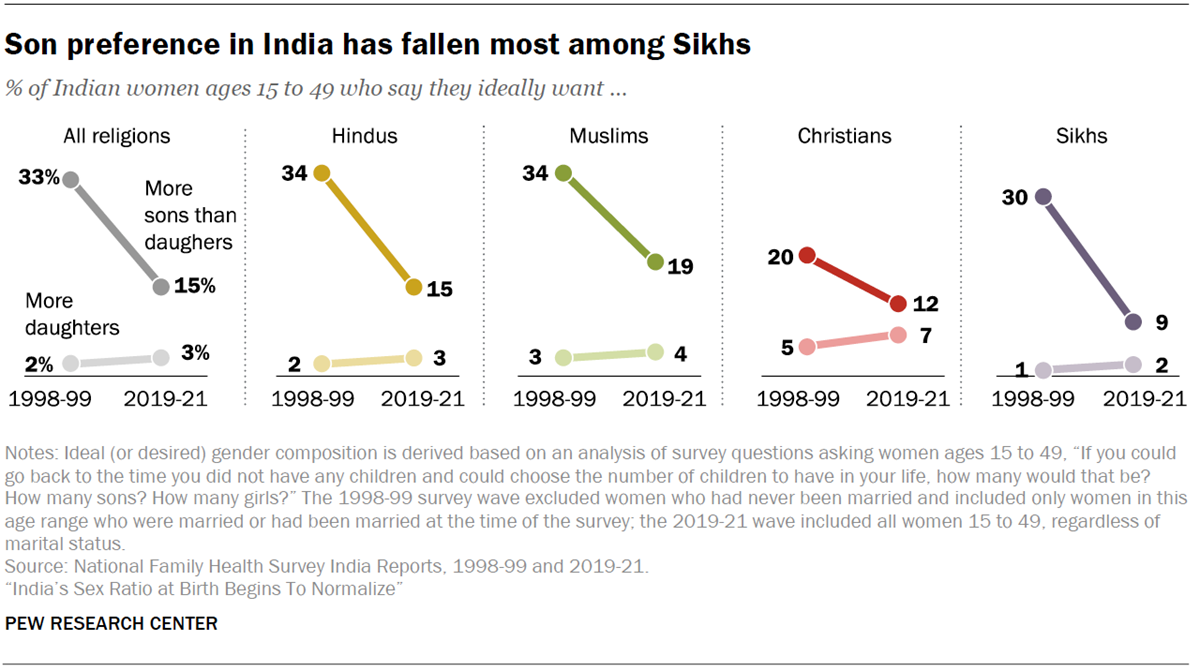 Pew’s latest report on religion in India examines the sex ratio at birth among Hindus, Muslims, Christians, and Sikhs, as other religious communities were too small to study. The report found “signs of normalization” in the ratio of baby boys to baby girls, with “son preference” or “daughter aversion” declining “sharply” among Sikhs which previously had the greatest gender imbalance.

While acknowledging geographic variations in laws and norms within India, Pew explained:

Around the world, sex selection is often attributed to “son preference” (or “daughter aversion”), a form of gender bias in which families prioritize having sons over daughters for economic, historical or religious reasons. In India, son preference may be tied to cultural practices that make daughters more costly to raise than sons. In Indian tradition, only sons pass down the family name, thereby carrying on the family lineage, and Hindu sons are expected to perform last rites for deceased parents, including lighting the funeral pyre and scattering their ashes. Sons have also been a way for families to preserve ancestral property because males generally dominate inheritance lines (even though most Indian inheritance laws now prohibit gender discrimination).

Daughters, meanwhile, often take wealth away in the form of large dowries at the time of marriage, with payments sometimes continuing throughout a daughter’s life. And while sons continue to live in the parental home after marriage, with wives who often become the primary caregivers for aging in-laws, a daughter is expected to move away from her parents and into her husband’s family home.

The natural sex ratio at birth is approximately 105. The advent of prenatal testing and legalized abortion in India in the 1970s led to a rise in sex-selective abortions that skewed its sex ratio to a recorded high of 111.2 male births per 100 female births in 2010. This put India among the most skewed nations in the world from 2000 to 2020, alongside China, Vietnam, Albania, Armenia, and Azerbaijan. (The United Nations estimates that China accounts for 51 percent of missing girls and India 32 percent.) 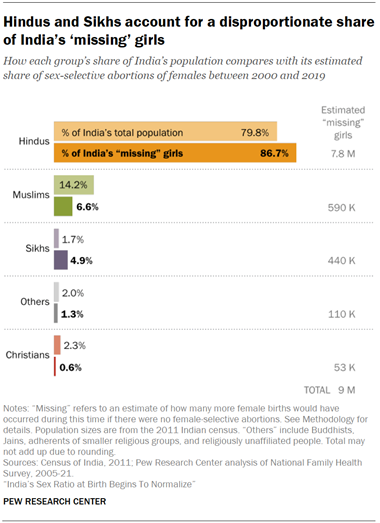 Meanwhile, Indian Christians have the highest preference for more daughters, both in share (7 percent) and change (up two percentage points). And only 49 percent of Christian women with no living sons want to have more children, close to the 43 percent with no living daughters who want the same.

Based on the available data on births to Christians (see sidebar below), Pew estimates:

Pew noted its report is the first to estimate “missing” girls in India by religious group, but also notes that differences in sex ratios at birth are not solely due to religion. Demographic factors such as wealth, education, and urbanness also play a role. So does caste.

Of India’s four major religious groups, Sikhs on average are the wealthiest, by a wide margin. Approximately six-inten Sikh households fall in the highest wealth quintile, according to the NFHS wealth index, which includes measures such as whether a household has certain appliances and where it obtains drinking water. This may be tied to their geographic concentration in India’s northwest, which is home to a disproportionately high share of wealthy households. But even within regions, Sikhs tend to be more affluent than other religious groups.

According to NFHS data, Christians are the second wealthiest group, with a quarter of Christian households (26%) in the top wealth quintile, followed by roughly one-in-five Hindus and Muslims. Although nearly half of India’s Christians are concentrated in the affluent South, the remainder reside mainly in the relatively impoverished Northeast and East, so Christians overall lag far behind Sikhs.

Christians and Muslims tend to be more urban than Hindus and Sikhs. About four-in-ten Christian and Muslim households are in urban areas, compared with roughly three-in-ten Hindu and Sikh households. Cities usually offer more advanced hospitals, public transportation and other essential facilities. However, Muslims who live in cities tend to be concentrated in poorer urban areas with limited access to basic services such as water, health care, education and sanitation. The same is true of other socially disadvantaged groups, such as Dalits and tribal communities.

Pew’s methodology and analysis rely mostly on India’s last census, which dates to 2011 because a 2021 update was delayed, and its government-supported National Family Health Survey (NFHS), most recently conducted from 2019 to 2021.

“Aborting females may have consequences that reverberate beyond the families making the choice,” noted Tong. “International research shows that societies with high rates of sex-selective abortions typically suffer within a couple of decades from a shortage of marriageable women and a surplus of men seeking brides. This ‘marriage squeeze’ can trigger a variety of social problems, such as increases in sex-related violence and crimes and trafficking of women.

“Even if India’s sex ratio at birth continues to normalize, the large number of girls ‘missing’ from its population could continue to have profound consequences on Indian society for decades to come.”

Editor’s note: This post will be updated with reactions from Indian Christian leaders. Pew’s specific analysis of Christians is posted below:

Some scholars suggest Christians’ balanced sex ratio at birth is due in part to the religion’s history in India, and the prevalence of Christian social programs and cultural practices that focus on girls and women.

Many of India’s Christians are descendants of Dalit Hindus who converted to Christianity in part to escape caste-based discrimination. Large-scale conversions are reported to have taken place in the late 19th and early 20th centuries in connection with famines, natural disasters, epidemics and other crises that resulted in economic hardship. After conversion, missionary organizations often provided low-caste Christians with educational opportunities, and converts could take jobs that previously had been denied to them based on caste status.

Some scholars suggest that low-caste Hindus who converted to Christianity gained more than just material benefits. Converting may have given former Dalit Hindus a new self-image, eased the transition away from their traditional, “unclean” occupations and made new educational opportunities possible for their children.

Women, in particular, may have benefited from these types of changes. Christian missions in India have emphasized evangelical work among women since the 19th century, operating schools for girls as well as for boys. There were also missionary programs dedicated to educating women and training them for employment, such as the Mukti (Salvation) Mission. In addition, many Christian organizations prioritize maternal and child health by improving women’s access to health care facilities. Some scholars trace Christian missionary work to long-lasting benefits for Christians and cite the Christian emphasis on empowering women as a partial explanation for Christian girls’ better health outcomes.

This history may help explain why Christians are the least likely of India’s religious groups to engage in sex-selective abortions, and why the share of Christians who would prefer to have more daughters than sons (7%) is several percentage points greater than other religious groups. Nevertheless, Pew Research Center estimates that Christians have practiced sex selection at least to some extent, given the roughly 53,000 female births missing among Christians in India between 2000–19. To some degree, the estimate reflects the pervasive influence of son preference throughout Indian society. Christians, especially those who live in the North and West, may not be immune to this bias and the practice of sex selection. For instance, in the most recent census, the sex ratio at birth among Christians in these two regions was around 110 boys per 100 girls. 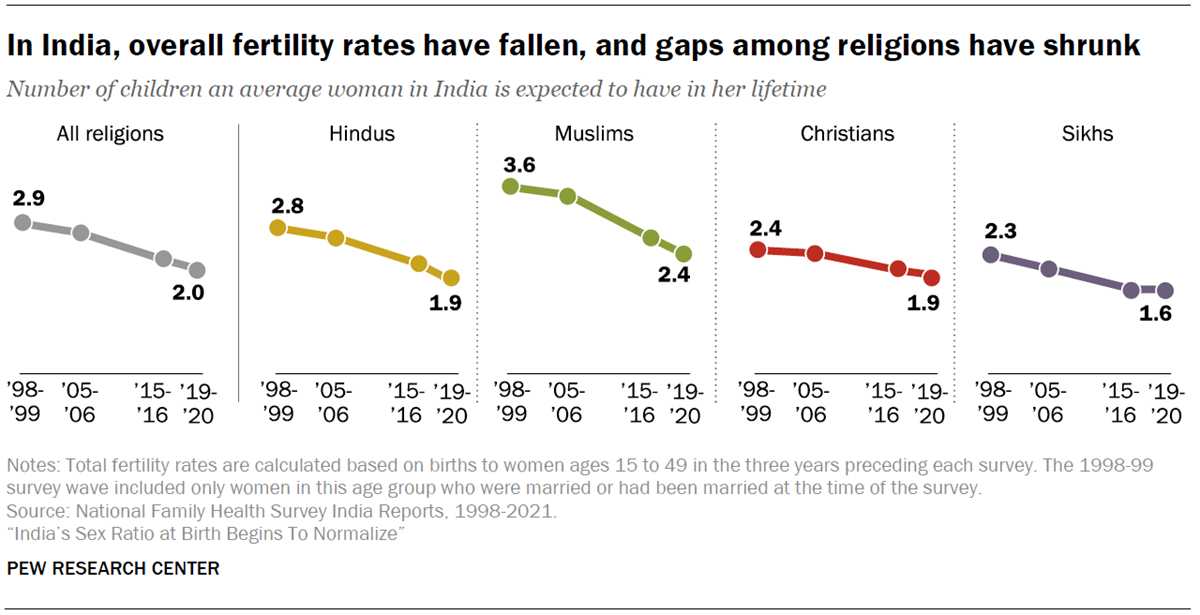 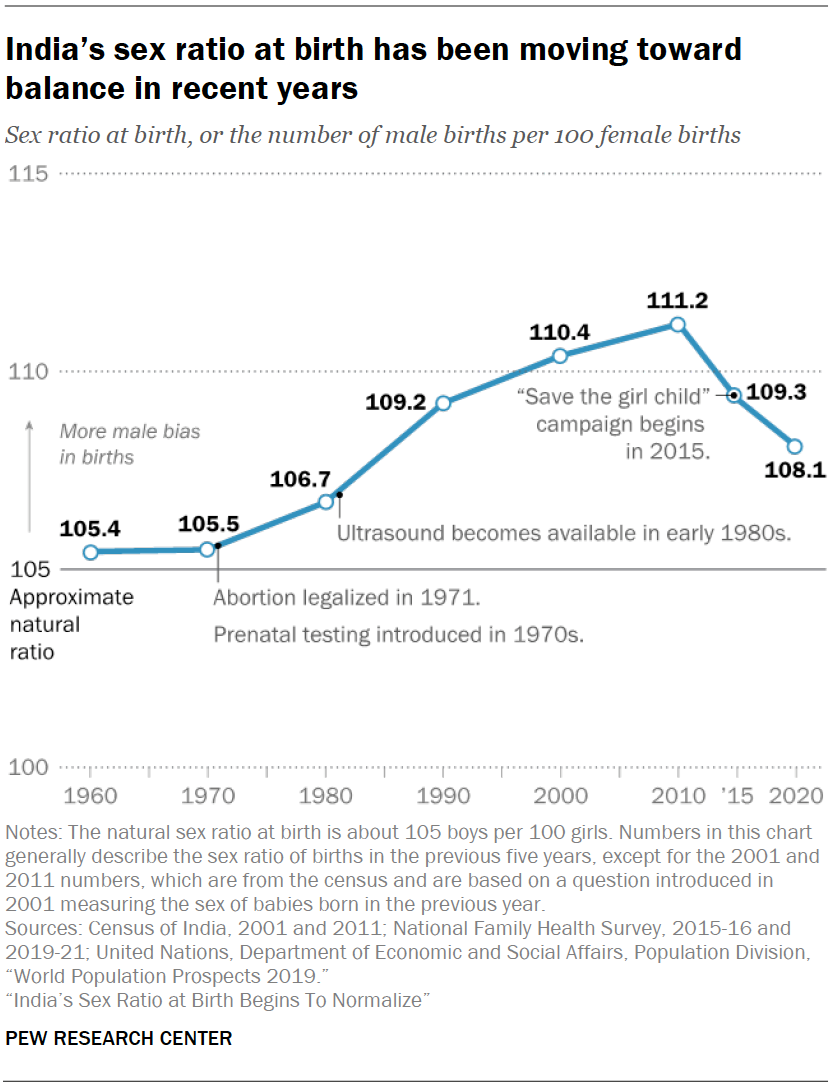 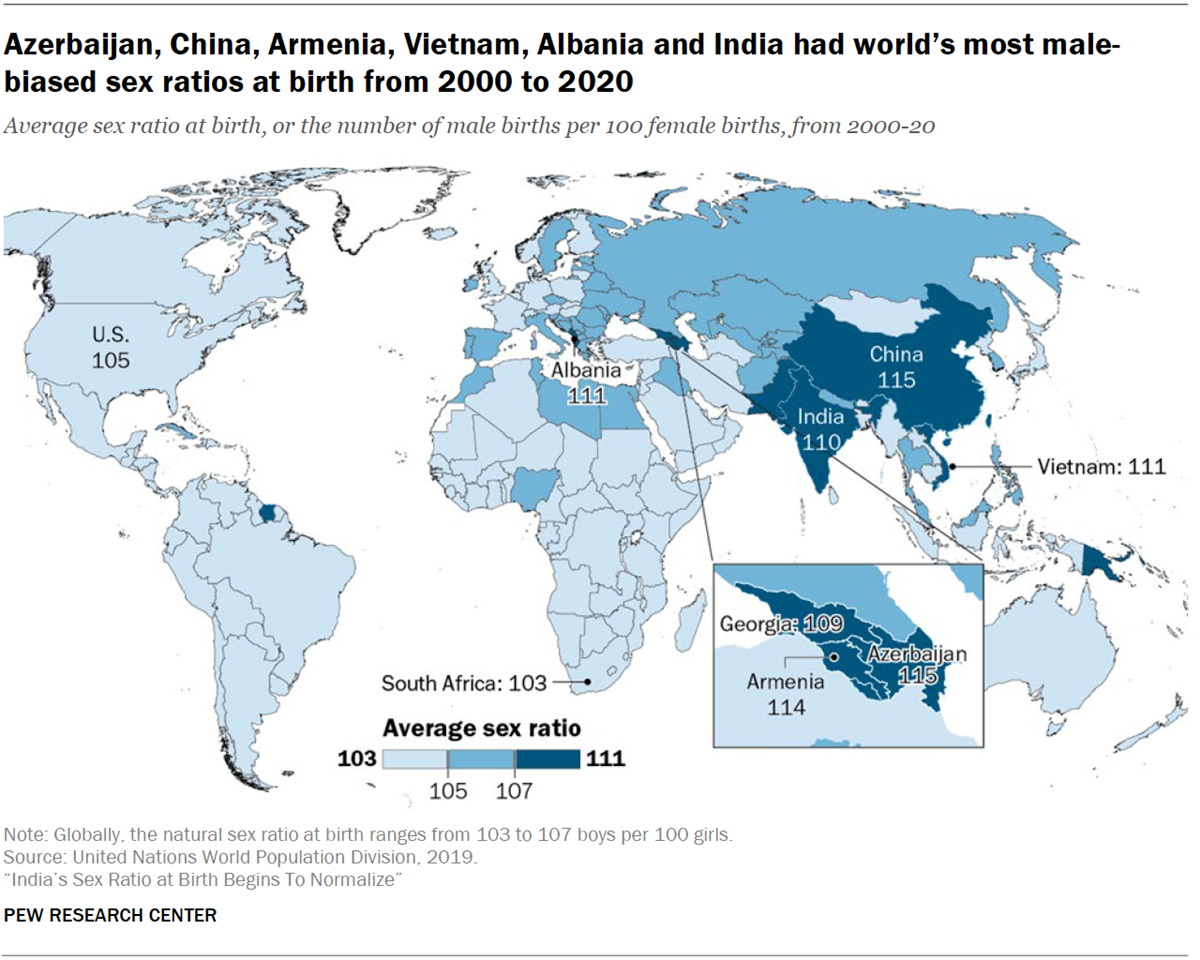 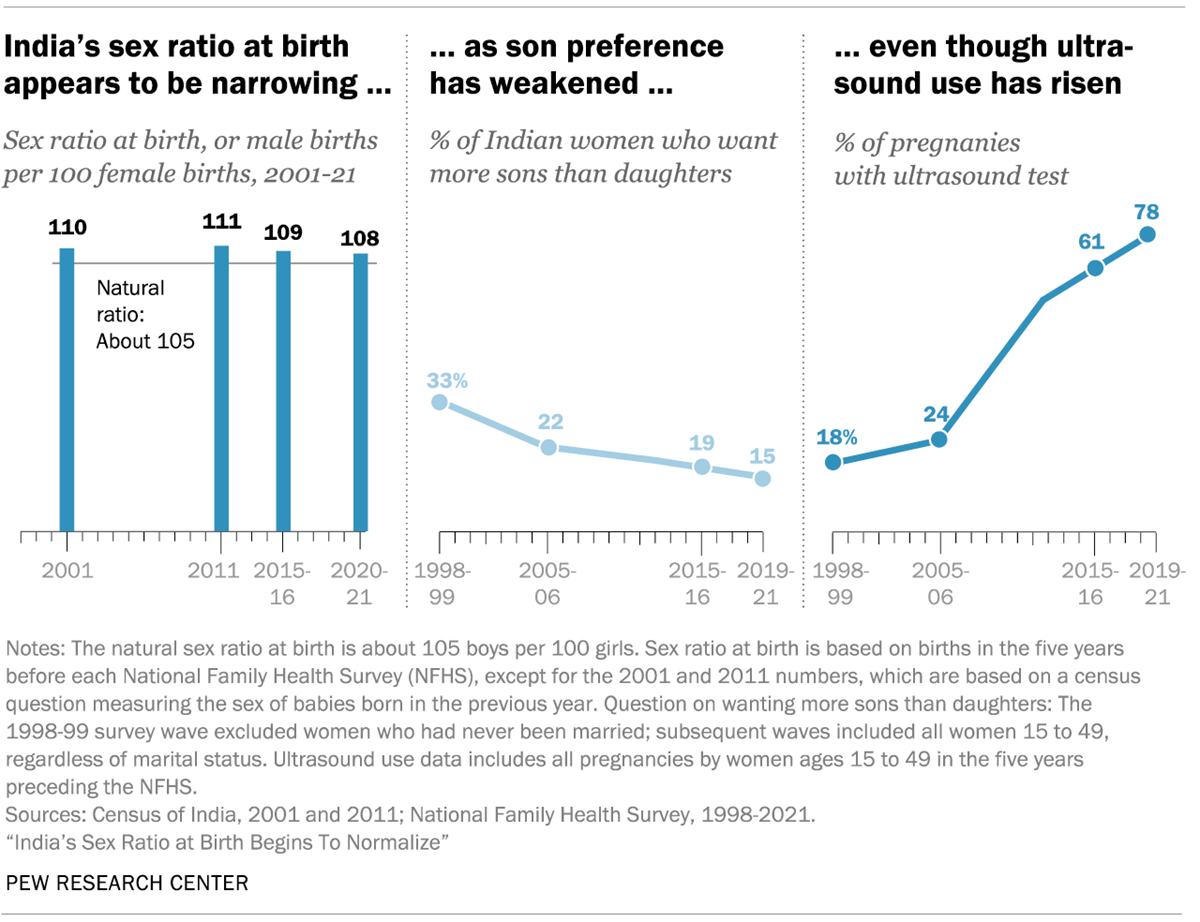 There Are Many Mansions in Heaven, but We’d Like Something Sooner